This temple, known colloquially by the name “Togenuki Jizouson”, is officially called Banchozan Koganji Temple, of the Soto Zen sect. Founded in Yushima, Edo, in 1596, the temple was relocated to Shitaya Byoubuzaka around sixty years later, and again relocated to Sugamo in 1891.
The temple’s honzon (principal image of Buddha) is the miracle-working Enmei Jizou Bodhisattva, known as “Togenuki Jizou” (“the Jizou who removed a needle”). Since the Jizou Bodhisattva statue here is normally withheld from public view, unfortunately it cannot be seen by visitors. However, it is said that there is value in offering prayers to the image that was created based on the statue’s appearance. A copy of the image can be received at the main hall of Koganji Temple. 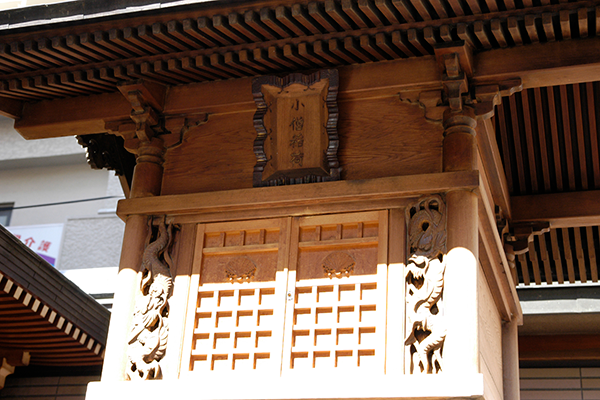 Banchozan Koganji Temple, of the Soto Zen sect was founded roughly four centuries ago in Yushima, Edo in 1596, and was relocated to its present location in Shitaya Byoubuzaka around sixty years later. In 1891 the temple was again relocated to its present location (Sugamo in North Toshima) to carry out maintenance work on its component sections. The temple’s honzon (principal image of Buddha) has always been the miracle-working Enmei Jizou Bodhisattva, known as “Togenuki Jizou”.
In May 1713, the wife of a man named Tatsuke, a resident of Koishikawa, Edo, who was a lifelong believer in Jizou guardians, was gravely ill and bedridden after the birth of their son. She had lost a great deal of weight, her arms and legs becoming “as thin as bamboo stalks”. Various doctors tried to help her, but her condition did not improve. Eventually, facing the end of her life, the wife said, “My family is cursed by an angry spirit. My grandmother told me that none of the women in my bloodline can live past the age of twenty-five. My older sister, too, died at twenty-five.” Mr. Tatsuke was filled with despair, but continued to pray wholeheartedly every day for his wife to recover from her illness, feeling that his only hope was to remain devoted to the Jizou guardian that his wife believed in.
One day, Mr. Tatsuke had a strange dream. A monk appeared, wearing black clothing covered with a Buddhist priest’s robe, and told him “Engrave my form in the size of one sun and three bu*, and set it afloat in the river.” When Mr. Tatsuke replied that it would be difficult to complete such a task quickly, the monk said, “Then I will bestow you with my image”, and Mr. Tatsuke awoke from the dream. Thinking to himself that it was an odd dream, he glanced at his bedside, and saw that something like a knot of wood was lying there. When he looked closely, it seemed strangely to be in the shape of a Jizou Bodhisattva, yet neither carved nor drawn. Mr. Tatsuke did as he was told, pressing the shape into an inkpad, and printed out the image ten thousand times, while reciting the name of the Bodhisattva. He traveled to Ryogokubashi Bridge, and prayed devoutly as he floated the images in the water of the river. Early the next morning, Mr. Tatsuke heard his bedridden wife calling to him, and rushed to her side. She told him, “Just now, the demon of death appeared beside my bed. But I saw a black-clothed monk wielding a priest’s staff use his staff to drive the demon away.” Mr. Tatsuke was overjoyed at the miracle. His wife, who had been so gravely ill, grew stronger every day, and by November of that year was able to leave her bed, and it is said that the couple lived in good health for the rest of their lives.

When Mr. Tatsuke told the story of this miracle at the home of a man called Yamataka, also present was a monk called Saijun, who was a frequent visitor to the Mori clan. Saijun asked to receive some of the Bodhisattva images, and Mr. Tatsuke handed him two of them, which he had been carrying. One day in 1715, a maidservant of the Mori clan mistakenly swallowed a needle she had been holding between her lips. The maidservant writhed in agony, but doctors could do nothing to help her. Then Saijun came to her side, and said, “This is a portrait of a Jizou. Please take it.” He took one of the images, and made her drink it with water. The maidservant immediately vomited up the contents of her stomach, and it was said that after washing with clean water, the needle she had swallowed was found pierced through the image of the Jizou.

The above account is part of the record of the miracle presented to Koganji Temple by Mr. Matashiro Tatsuke himself on July 17, 1728.
*Approximately 3.8cm (old Japanese measuring system)

A portrait of the Jizou is depicted on Japanese washi paper, of 4cm high and 1.5cm wide. It is said that a cure will be received by placing the paper on the site of pain, or by drinking the paper after one has swallowed a bone. A copy of the image can be received at the main hall of Koganji Temple. 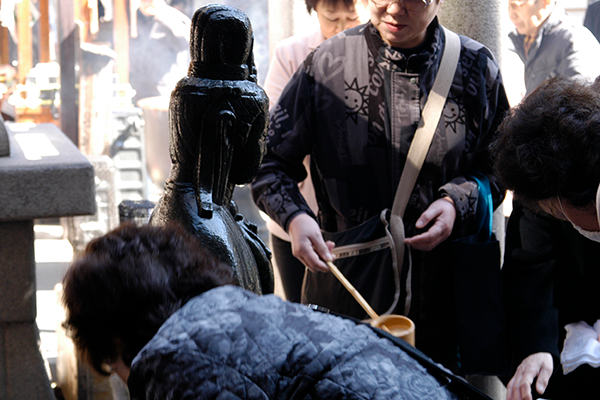 The damage caused by this fire was the greatest of the Edo period in terms of both the area affected by the fire and the number of deaths, and it is often cited as the first of the three great fires of Edo. Almost all parts of the city within the outer moat were damaged by the fire, and Edo Castle, including its keep, multiple daimyo’s residences, and the majority of the urban district were destroyed. While accounts are various, the number of deaths is recorded to have been between 30,000 and 100,000.