This temple, known as one of the Edoroku Jizouson (six Jizou guardians of Edo), is officially called Iouzen Toko-in Shinshoji Temple of the Shingon Buzan sect. The date of the temple’ s establishment is unclear. There is a monument bearing a haiku by the poet Matsuo Basho, dated 1615, within the precincts. The Jizou statue wears a large umbrella-like hat, and carries a staff. Standing at the entrance to the Six Highways of Edo, the Jizou guardian protected the safety of travelers. (Sugamo was the entrance to the Nakansen-do highway). Many documents, including the Old Map of the Eight Provinces of Kanto and Edo, and the Map of Edo, indicate that the vicinity of Shinshoji Temple was a thriving traffic nexus in the past.

Iouzen Tokoin Shinshoji Temple, known as one of the Edoroku Jizouson (six Jizou guardians of Edo), is affiliated with the Shingon Buzan sect, and is a branch temple of the Head Temple Hasedera Temple located in Hase, Sakurai City, Nara Prefecture. While it is not known when Shinshoji Temple was first established, imperial prayers for Emperor Shomu (who reigned from February 4, 724 to July 2, 749) were held here. It is said that the temple was founded by the priest Gyoki, who later became a Bodhisattva. 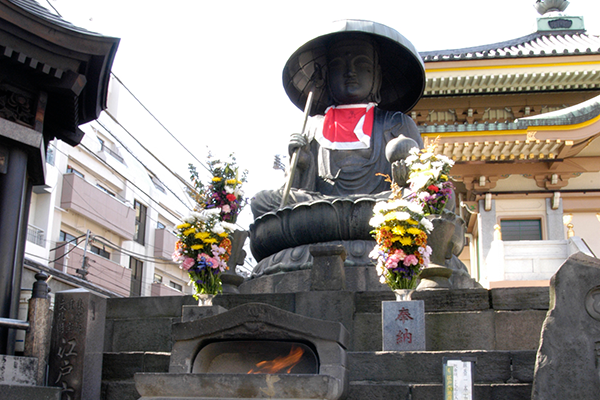 According to the Topographical Survey of 1826, it is recorded that there was a revival opening (a reconstruction of destroyed portions) of the temple by Yuhen Hoin in 1615. In terms of the era, that was the year in which the Tokugawa clan was victorious in the Summer Siege of Osaka, and came to rule the nation.
The same document states that Shinshoji Temple was a branch temple of Togakuji Temple in Tabata from around the Genroku era (1688-1704), but seceded in 1711, and became a branch temple of Ninnaji Temple in Kyoto, of the Omuro sect. Subsequently, Shinshoji seceded from Ninnaji in 1900, and became a branch temple of the Head Temple Hasedera Temple of the Shingon Buzan sect, which it remains as today. 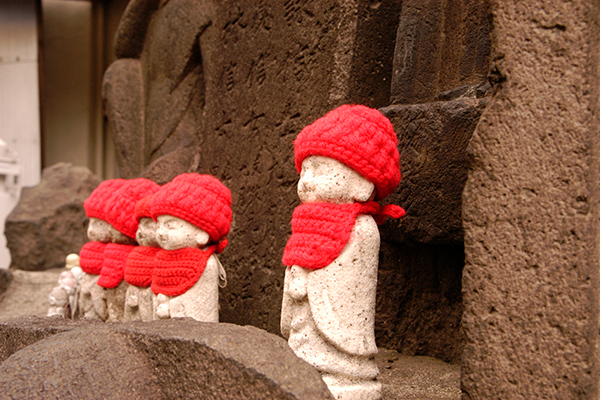 In the left-hand side of the precincts, there is a large Jizou statue 2.68m in height (3.45m including the base) sitting cross-legged on a lotus base. This is one of the six statues placed in locations within the city limits of Edo that are known as the Edo Roku Jizouson (Six Jizou Guardians of Edo).
The temple petitioner of the Jizou guardian at Shinshoji was a man called Jizou Boshogen, who lived in the district of Fukugawa in Edo. This is one of the six Jizou Bodhisattva statues of approximately the same shape that were made during the fourteen years after he made his petition in 1706. This statue, a seated figure cast from bronze, was the fourth to be made. Shinshoji’s Jizou guardian statue was completed in 1714.

At the Edoroku Jizouson Million-Prayer Rosary Memorial Service, which is held annually on June 24, prayers are offered to the Six Jizou Guardians of Edo by rotating a huge Buddhist rosary consisting of 541 prayer beads made of cherry wood, at a total of 16 meters in length, by a crowd of five to six hundred people.